Best known by the sobriquet Captain W.E. Johns, William Earle Johns was the creator of one of the best loved characters in English literature – Biggles. Drawing upon his time as an RAF pilot during the Great War, Johns penned over one hundred Biggles stories, charting the rip-roaring adventures of his eponymous fighter-pilot ace. He was also the author of over sixty other novels and factual works, as well as scores of magazine articles and short stories, and the brave new world of aviation remained his passion throughout his prolific writing career. 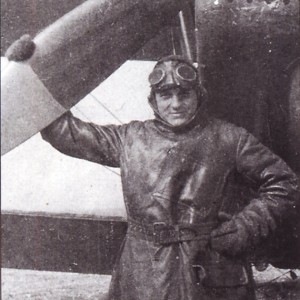 What is perhaps less well known is that Captain W.E. Johns wrote many of his Biggles stories here at Ballindalloch. In September 1944 Johns became the tenant of the 5th Baronet, Sir George Macpherson-Grant, when he took up the lease on Pitchroy Lodge.

His attempts at re-joining the RAF had been thwarted (at 46 he was too old) and Johns had spent the period of the Blitz serving with his local ARP (Air Raids Precaution) unit in Reigate Heath, Surrey. For the majority of the war he had worked for the Air Ministry, helping with the recruitment and training of RAF and WAAF personnel.

His reasons for seeking refuge in the Highlands lie in the complexities of his private life. Unhappily married and with his wife refusing him a divorce, Johns wished to make a home with his long-term partner Doris Leigh, but without prejudicing his standing as a children’s author. So he chose Ballindalloch, far off the radar of polite London society. William and Doris were to make Pitchroy House their home for the next nine years. 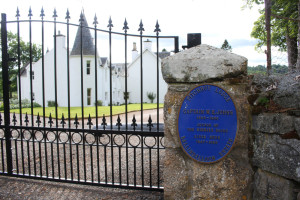 Whilst staying here in Ballindalloch the ‘Captain’s’ output was prodigious and many of Biggles’s best known adventures – Biggles in the Orient (1945), Biggles Takes a Holiday (1949) and Biggles Takes the Case (1952) to name a few – were penned as his creator sat in his study looking out across the River Spey. In Biggles Delivers the Goods (April 1946) Captain W.E. Johns has his hero deliver the following soliloquy:

“While men are decent to me I try to be decent to them, regardless of race, colour, politics, creed, or anything else…I’ve travelled a bit, and taking the world by and large, it’s my experience that with a few exceptions there’s nothing wrong with the people on it, if only they were left alone to live as they want to live.”

It does not seem too much of a stretch of the imagination to conclude that Captain W. E. Johns found a place he could be ‘left alone to live how he wanted to live’ here at Ballindalloch.

Biggles fans regularly come to Speyside to soak up the scenery that inspired the author; apparently, if one is very observant it can even be recognised in passages of his books.