The dark green, blue and black tartan and red heckles of the Black Watch, oldest of the Highland regiments, has become part of the iconography of Scotland and the history of the Am Freiceadan Dubh is interwoven with the history of Ballindalloch Castle. 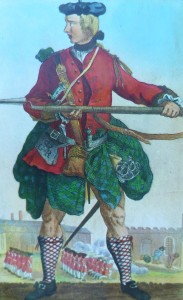 Though today Badenoch and Strathspey is a haven for tourists, there was a time, four centuries past, when this part of the Highlands was a haven for rebellious clansmen and lawless bandits. Throughout the turbulent years of the English and Scottish Civil Wars the loyalties of the major Highland Clans were always volatile and at various times both royalists and republicans had found willing help in the mountains beyond Perth. The year 1645, for instance, had seen the flag of the Covenanters flying above Ballindalloch Castle, leading to its sacking by Royalist forces under the command of the Marquis of Montrose, who himself had sided with the Covenanters only a few months before.

The ‘pacification’ of the Highlands in the 1650s by government forces and subsequent Restoration of King Charles II encouraged the establishment of a permanent force to ‘watch over’ the region. Independent companies of loyal Highlanders were formed under the overall command of the Earl of Atholl. Alongside the clans Argyll, Murray, Menzies, Fraser and Munro, the Clan Grant offered its fealty to the newly restored Stuart monarchy by raising its own company of Highland troops to ‘watch over’ the territories of Badenoch and Strathspey.

Following the failed Jacobite Rebellions of 1689 and 1715, and the split loyalties once again evident amongst the Highland Clans, the independent regiments were disbanded, only to be revived again in the 1720s. At the request of Major-General George Wade – famous (or perhaps infamous) for overseeing the second ‘pacification’ of the Highlands in the aftermath of the 1715 uprising – six companies, each comprised of one hundred men, were to be raised and commanded by clan leaders loyal to the Crown. In Wade’s own words, these men were to be “employed in disarming the Highlanders, preventing depredations, bringing criminals to justice, and hinder rebels and attainted persons from inhabiting that part of the kingdom.” 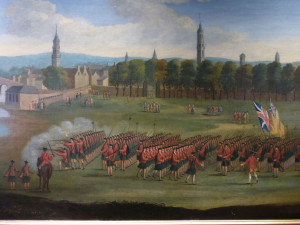 One of these independent companies was formed under the command of Colonel William Grant, the 9th Laird of Ballindalloch who, like his forefathers, took on the responsibility of ‘watching over’ Badenoch and Strathspey.

To set themselves apart from the existing regiments of the British Army, and to drum home their ‘independent’ identity, the soldiers of the Highlands eschewed the traditional red coat of the British soldier and donned the now famous dark green, blue and black tartan. This idiosyncratic uniform, when combined with the force’s primary role of ‘watching over’ the Highlands, gave rise to the Gaelic epithet Am Freiceadan Dubh: and the name ‘Black Watch’ was to stick.

In 1739 the independent Highland companies were brought together to become a ‘regiment of the line’ – the 43rd, or Highland Regiment of Foot. Seven years later the 43rds passed their first significant test of loyalty to the Crown, helping to put down (what proved to be) the final Jacobite Rebellion. 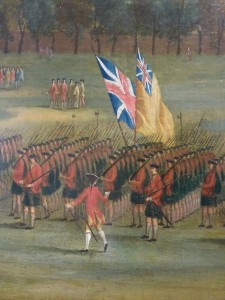 Records suggest that a significant number of the Black Watch serving in 1746 had relatives fighting alongside Bonny Prince Charlie. It may have helped that the regiment itself was stationed upon the Kent coast to repel any possible invasion from France. Nevertheless, companies of the Black Watch were involved in the bloody security operations that followed Culloden and carried out their duties without wavering.

Despite their indisputable loyalty, from the regiment’s inception and beyond, men of the Black Watch saw themselves as something apart from the British Army. Writing in 1822, one of their commanders, Major-General Sir David Stewart of Garth, wrote of his men that they were:

[O]f a higher station in society than that from which soldiers in general were raised; cadets of gentlemen’s families, sons of gentlemen farmers…men who felt themselves responsible for their conduct to high-minded and honourable families, as well as to a country for which they cherished a devoted affection. [cited in Trevor Royle, The Black Watch: A Concise History (2006) p.20]

This devotion to the Highlands would help sustain the morale of the Black Watch throughout the following centuries; fighting far from home upon the battlefields of Fallujah, Waterloo, the Somme, Ypres and Alamein, to name but a few. Today the proud military traditions of the Highland soldier are upheld by the 3rd Battalion, The Royal Regiment of Scotland, or the ‘Black Watch’ as they still prefer to be known.